Did anyone else notice how nice the weather was last week. I sure did, and it was a nice break from a seemingly extra cold winter. Well... winters back. So to keep everyone's spirits up, I am doing a one time only opportunity to win a 307 item out of my personal collection. Its a one off prototype OFF WHITE ON WHITE 307 "Outlaws" design T-shirt in xl size. We did this shirt to test out the colors and we only made one and one only. Its Brand NEW!

Here's how you can win it.

ONLY SUBMIT THE ANSWER ON THIS BLOGS COMMENT SECTION AFTER 3:07pm!!!!

The first person to get them all right will win the prototype "ghost" 307 shirt.

Question 1:
What was the nickname of the B-17 that crashed somewhere in Wyoming, leading to the locations current name "bomber mountain"?

Question 2:
What would 307 pounds of gold be worth rounded to the nearest US dollar, based on the current gold price (as of 3-07-11, you'll have to wait to answer this one)?


Question 3:
What famous lawman AND outlaw was hanged one day before his 43rd birthday after being accused of murder?


Remember wait until 3:07pm MST and submit your answer in the comment section at the bottom of this blog page. The first person with all the RIGHT answers will win, and the winner will be contacted through email to collect there prize. 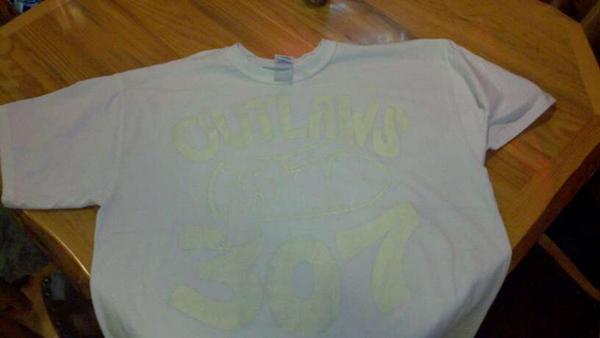 BE PROUD OF YOUR STATE 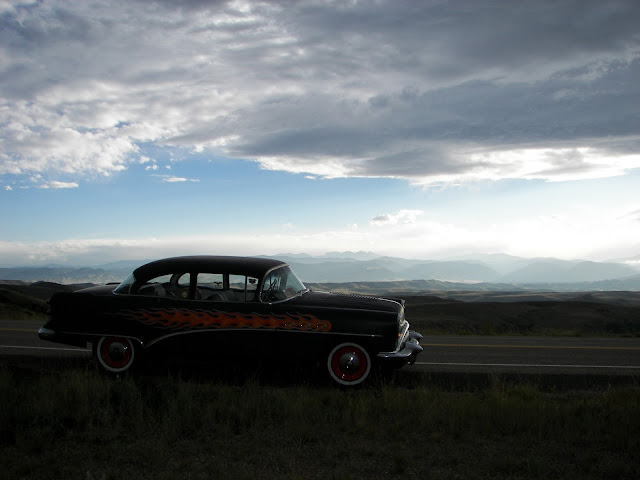 I have noticed something lately I wanted to share. People are really proud of where they are from and aren't afraid to say it. When I was on a resent trip to sunny polluted Southern California, I found it easy to tell someone when they asked where I was from, "I'm from Wyoming" usually followed by "the 307". For most of us Wyomingites, that not a hard thing to do. It's easy to be proud of our State. Its beautiful, calm, and all the other stuff. But, in the past few months I have heard people saying something that is music to my ears. "I'm from 307". I know its been said before in that context, and we weren't the first to want to promote our home state with it, but it seemed to carry a stigma before (possibly from gang stereo typed usage of area codes, or certain peoples paranoia)  I don't dare say that we are to blame for this increase in people using the term "307" in place of Wyoming, but its a perfect example of why our company makes what we make. We are 307, You are 307, your Mom is 307, your grandparents, your dog, your house, your hairpiece, all if it inside or from this State, we are all part of one big old happy family.

Be proud of where your from, and if you still live here, realize how blessed we all are to do just that.
Next time your asked, "where are you from?"


proudly say, "The 307" and when asked, whats that, "the Great State of Wyoming." booya

I want to wish everyone a Happy Valentines day, I personally am not a fan (I'm the Valentines Scrooge), but its a good excuse to be extra nice to the ones you love... and all that other stuff ;)

Just got back from the GNRS 2011 in Sunny Southern California, and my first thoughts are... Thank God I Live in Wyoming. Even being almost stuck in Denver (and by almost, I mean, we were really close to staying the night) and the ridiculously cold weather that we came home to. We went from 70+ degrees to -20 degrees. Yeah, that part sucks, but California in general is just not for me. ON the other hand, the GNRS was for me. It was truly an amazing event with great people and GREAT cars. 307 was heavily represented by Moonshiners Car Club members being that at one of us wore an article of clothing that we produced almost everyday.

Once we made the long layer riddled trip to our hotel the wildest thing happened. Without setting it up this way our room number was 307. 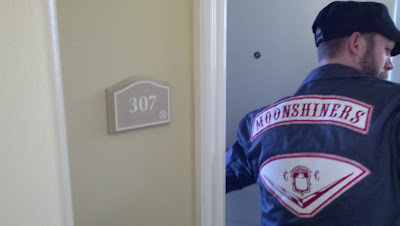 That was an awesome coincidence. We meet a really cool couple from Canada that had given us a ride from the airport to the hotel in the rental car, and they weren't even staying at the same hotel. Also meet a couple from Montana that gave us a ride to the Fairplex (were the show was held). It was amazing how many really nice people we meet that were willing to take time out of there trip to help us out. Car people are really great.
Speaking of car people, there were thousands of them at this years GNRS. It was a massive fair grounds filled to the brim with an extremely high level of cars. One of the most amazing sections was Building number 9 which houses the "History of the Custom Event". over 75 of the greatest custom cars from the 40's to today, Beautifully restored, or traditional styled, or as they were from the day they were build made this building very special in many regards. I was honored to have seen it, because the level and fame of these cars, and so many in one place, might never happen again.

9 Buildings all full of different styles and types of vehicles, all at a level of quality that you rarely see outside of California (unfortunately).
Heres some photos 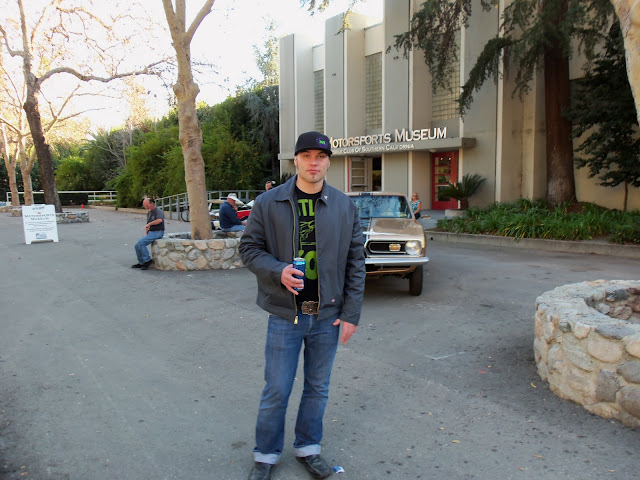 307 Hat and shirt, representing in Cali 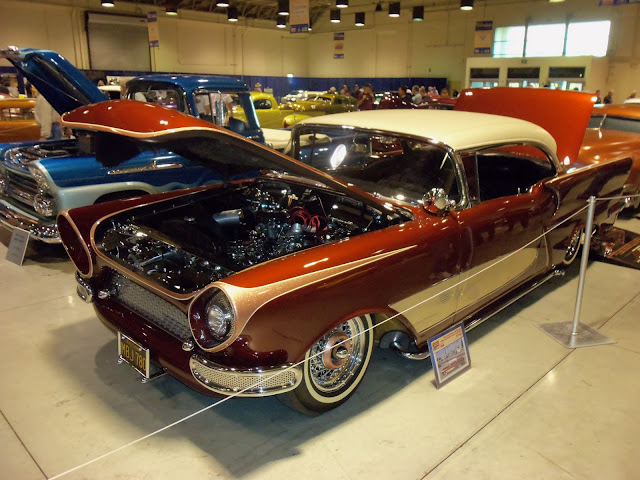 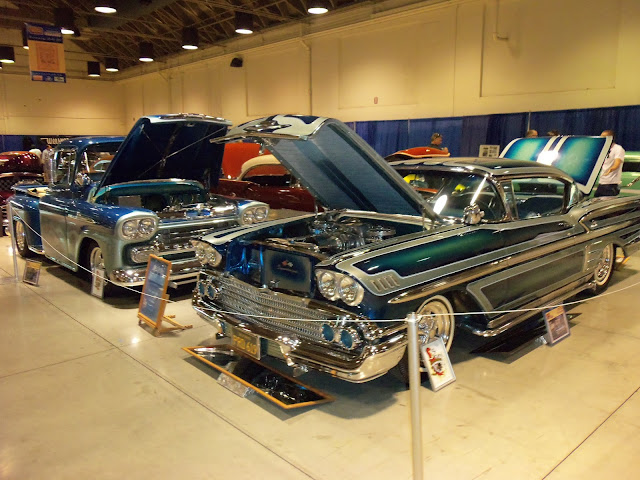 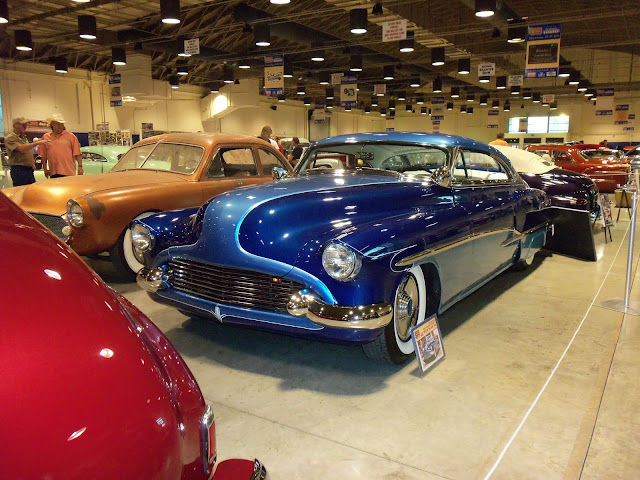 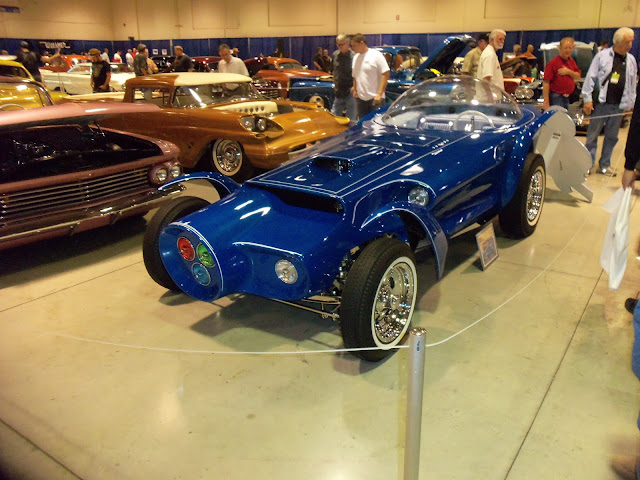 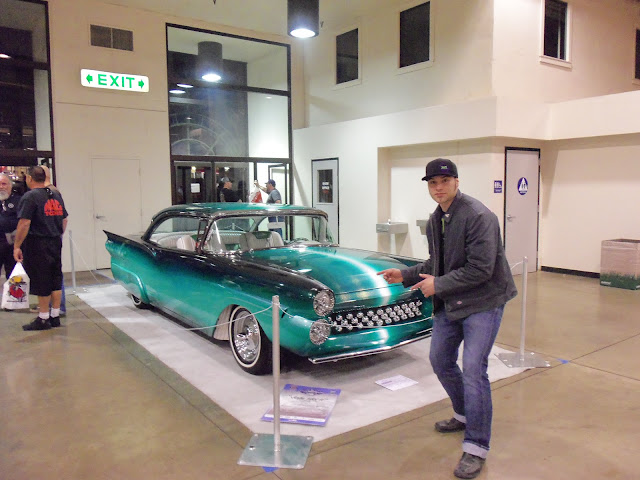 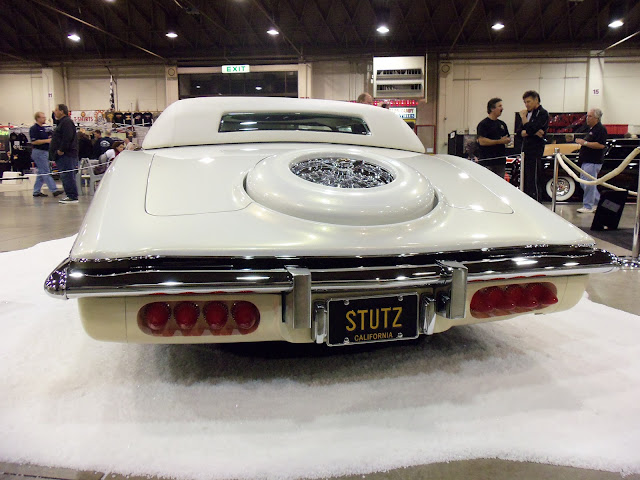 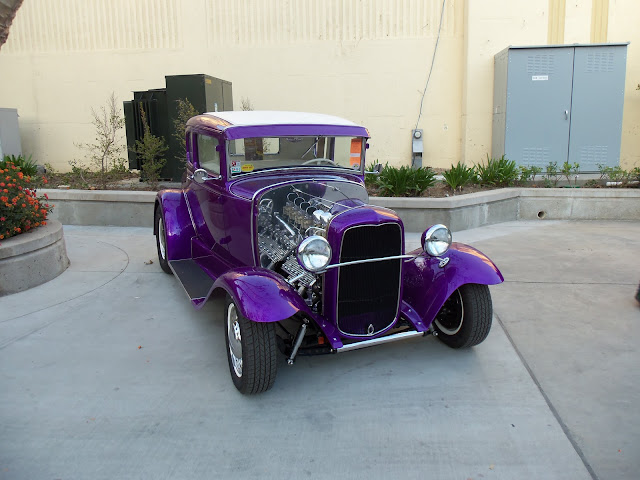 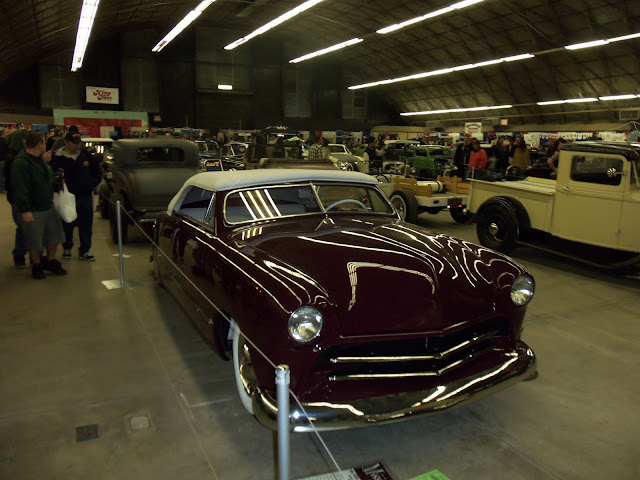 This car drove all the way from Florida, but left with something like 8 trophies 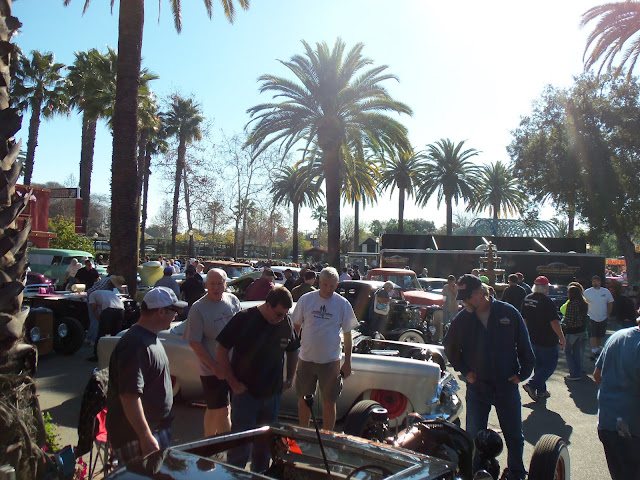 Possibly one of the coolest things that happen during this trip (and there were lots of really cool things) was the fact that a local Sheridan son now living in Denver running a company called Speed Metal and our own Steve "Shooter" Benth (Pinstriper and personal mentor & Friend) had a Bike in the show. Let me just clarify that statement. Shooter Painted one of the coolest bikes I have ever seen. That bike was built by Dave Barker (Speed Metal) and built to the 9's. 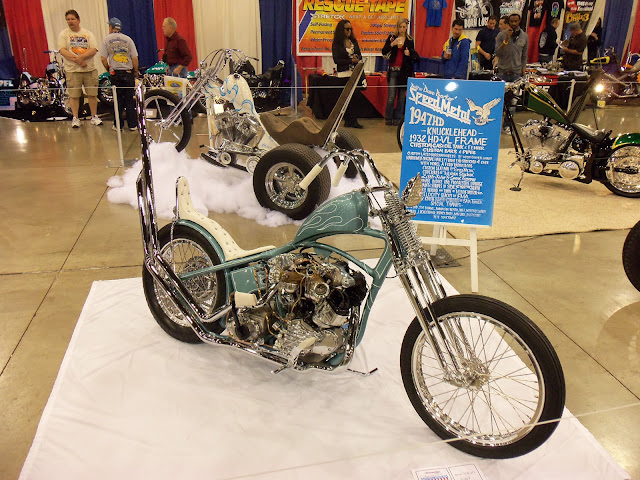 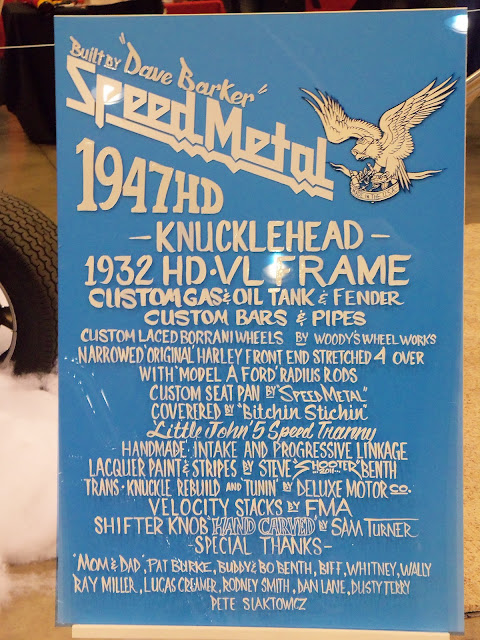 This bike looked to be leaving quite an impression. Hell, just the fifteen minutes or so I hovered around it, people made a point to stop, passing up others. Since I have been home I have been trying to catch up on email, computer stuff, and the like, during which I have seen several didn't posts on this bike specifically. Congratulations to Dave and the Boys from Speed Metal, and to Shooter for getting recognition for your talent.
I hadn't talked to Shooter before I left Sheridan, so other then knowing that Dave had a bike at the show, I had no idea Shooter was there. It was really cool to meet up with and we even got to walk around Building 9 together. After all the years of him and I talking about different historic customs, to be standing there with him as he saw them for the first time in person was beyond swell.
My Friend Nate Barney and I on Sunday, stuck around long enough to catch some of the Historic customs leaving.
I got some farely rough video, but boy 'o boy is it cool to see these autos drive. I will leave you with the footage. Thats all I have the energy for tonight. 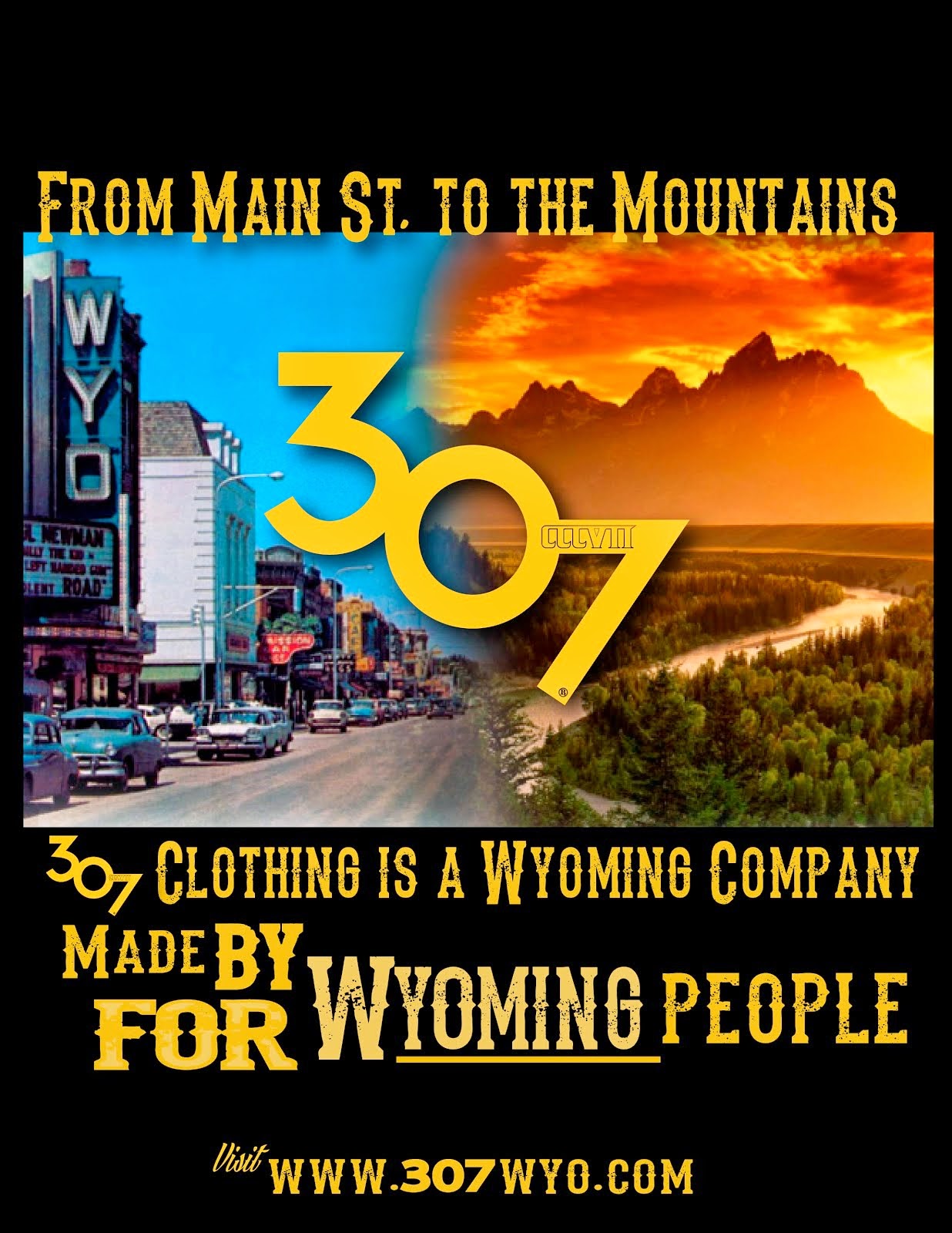 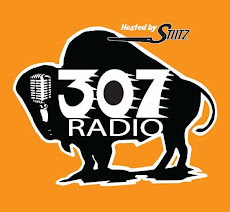 Stalick Brothers L.L.C. is proud to be from the State of Wyoming. That is why they created the 307 brand of clothing. The idea was that all the citizens and visitors to 307 can show their pride and style with apparel specifically designed to be %^&*ing AWESOME! But "Stutz" knows that 307 is more than just clothing. It represents all the things we love in our state. 307 is Wyoming, and Wyoming is its people. This blog Chronicles those people.